So last week I made a proclamation that there would be a post this week updating the status of what was going on with the auction house! Well, that isn't happening once again because I simply have not had time to list things. This has brought me to the conclusion that I need to clone myself! 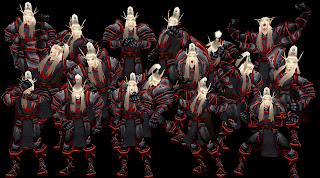 Just imagine how much better the world would be with a group of me running around! Well, since the cloning idea is probably gonna take some time, not to mention a whole lot of petri dishes, I better come up with a better game plan.

The good news is that I have been spending a lot of time doing a whole lot of things. Some of those things I can share with you, while other things I am simply unable to share at the present time. The biggest time sink of late has been the darn Hearthstone Beta. It seems just when I was starting to break the bindings of Blizzard (that should be an item in one of their games by the way), they introduce me to some brand new shiny that just sucks all will power right out!

I am not going to lie, the game is a ton of fun and I am excited for when it goes live. I was talking with a friend and fellow gamer at work yesterday about it and he suggested that I do some posts about the different deck types and strategies involved in the game. I am seriously considering doing this, but simply from my perspective. Light knows I have managed to put together some pretty fun decks and had a lot of fun playing crazy combination cards! We have several people within our gaming community that has actually received invitations to the beta and so I am trying to put together some sort of tournament for fun. If I do this, then I will definitely be posting up the results of how I crush them!

Speaking of the gaming community, we have been working extremely hard over the last several months adding new features to our forums and making plans to update the site with a lot of cool features. It is pretty exciting to actually see the community grow and expand. Along the lines of growth, due to our branching out and covering a wide range of games we took a pretty big step by retiring the Mass Affluent Slayers Gaming Community and relaunching under the Game Slayer Nation!

Again, I am sorry that I did not get to post up an auction house report today, but I hope you all can understand that my time has just been really tight lately and sadly it doesn't seem to be changing any time soon. With that said, allow me to share the latest video (just posted to YouTube a few minutes ago) from The Usual Suspects series I am doing on YouTube!