Two long hours I have been making myself suffer in an attempt to write something that does not sound jaded and filled with hatred regarding the recent patch 5.3 notes. As such, I am simply going to do what my Grandma always has said, "If you don't have anything nice to say, then don't say anything at all."
Posted by Ruhtra No comments:

Email ThisBlogThis!Share to TwitterShare to FacebookShare to Pinterest
Labels: PVP

Hello everyone! I hope you guys are having an awesome week so far! Today is the big 5.2 patch in WoW. I have some mixed feelings on some of the patch, but overall I see a lot of good coming out of the patch, but that is not the focus of today's topic because the Light knows there will be hundreds of articles, blog posts, and forum threads sharing some pretty "unique" opinions. Instead I want to take some time and look back at the old days of WoW!

Now you may be asking why I am feeling nostalgic today? Well, the simple answer is because last night I led a small group of my guild on what we have affectionately come to call, Retro Raids. The concept, for those not quite quick with it, is that we gather a group of folks and we go and knock out some old content. The runs have a two fold purpose. The first and foremost is to just have fun! You know that thing that happens sometimes when you play online games? No? Okay, moving on then! The second is to start to get our people used to the concept of logging online at a set time and working together as a team to lower the boom on an old school baddies. 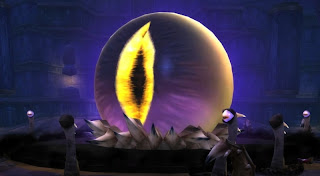 I actually feel like the night was a success even though we only had five people online. We would have had six, but one of our guys didn't read the announcement where it said we would be starting the runs late. Our people had a lot of fun and got some good laughs at the expense of one fat cow who couldn't find his way out of a wet paper bag without help, much less taking the short cut to the Molten Core! At the end of the night, some folks had some nice new transmog gear. Some of our group managed to pick up some of the AQ40 mounts they didn't have, and we even had a few achievements earned, but the greatest thing of all was that we had MAS tagged players running content again.

Well, I do not want to take up too much of your time today as there is a lot of notes that you should be reading up on! Have a great day and I will see you all later!
Posted by Ruhtra No comments:

Can I just say that you guys are the greatest? Why you may  be asking yourself? Well, it is because that  everyday for the last several months, you stop by the blog and check to see if I have updated anything around here. Now I do not know about anyone but me, and I have to say that I think you guys are the greatest to continually come back around here just to see if anything new has been updated. That really means a lot to me personally and I just wanted to express my appreciation for your continued support.

Alright! Now that we have that emotional heart felt warming stuff out of the way, let's talk shop. The blog has been pretty barren for quite some time, aside from the occasional Sunday Brunch we have every now and then. I aim to start changing this as soon as possible. So the question is how do I plan to go about this? The simple answer that requires no thought is to simply say that I plan to write more, but I know you guys probably want to know more than that, right?

Well, one way I plan to get a little more active is by expanding what we cover around here. Now I know in the past, I have talked about wanting to become more focused on gaming as a whole, rather than being entirely centered on one game. This has not changed! Let me repeat that... this has not changed! I very much plan to continue discussing WoW, as I spend quite a lot of time playing the game; however, the time I spend in WoW now is more casual than I have ever been and I do not feel that I could write in-depth posts for the more progressed player. What I can do though is share with you what I am doing. For instance, most of you would probably be surprised to know that Ruhtra has been parked for quite some time, as well as my Mage Azurelazuli. Instead of healing, I have taken on tanking with my Death Knight, Druid, and Warrior. That is a pretty big change for a guy who has done nothing but healed since back in Vanilla. I also plan to share a little bit about my insights into the different classes, since I am leveling multiple classes versus staying with just one or two. There are several other things on my mind that I am debating on, but the good news is that I do have several things in the works that revolve strictly around writing here at Holy Shock.

In addition to the written articles I have been working on, I also plan to continue our YouTube channel. Now for right now we pretty much have only one series going at the moment, The Nub Seeker. When I first started this series, it was primarily a way for me to track quests and earn the title of "the Seeker"; however, when Blizzard merged our achievements, I earned the title off of the combined quests I had completed between all of my characters across my accounts. I was slightly bummed and had considered just shelving the series and looking into something else, but then when I had been watching some pre-recorded footage, I realized that I was actually having fun with seeing the content of the reworked zones. After doing some serious thinking, I finally decided that I would continue on with the series. The concept as it stands currently, is to record the quests and then go back and provide the commentary on how to complete the quest. Then with the time that is left in each video, I plan to discuss things that have come to mind from doing the quest. This can include discussions about macros, play styles, quest design, lore, or anything else specifically related to the quest that is being covered in that episode. If you have not checked out the series, then make sure and click on this link or select the tab from above and take a look at the Nub Seeker series. Your support there would be awesome and would certainly inspire me to continue working to improve the series.

In addition to the Nub Seeker, I just added a section up top titled, "Shockcraft"! This is for a new series I am launching today that is simply me playing Minecraft on a server that is being sponsored by Holy Shock. At this point I have no real goals for that series other than to just have fun. Now the first episode has absolutely dismal sound quality due to all of the extra sounds that have been added in from the Tekkit Classic mod pack. So my apologies if you cannot hear anything of what I am saying in that episode, but I promise that things will get much, much better there as well. So if you like Minecraft, then give this series a try and let me know what you think.

I have been experimenting with social media lately as well. We recently launched a MAS Gaming Community Facebook page and I have to admit that there is a decent amount of work that goes into maintaining a page like that. I also set up a page for Holy Shock, but have yet to do anything with it. I plan on changing this, just not too sure exactly how I am going to go about it. So basically, stay tuned for more information about our adventures in social media!

Well, I think I have taken up plenty of your time today. I hope you guys continue to support us here at Holy Shock. You guys are awesome and you have my promise that we will always be thankful and appreciative towards each and every one of you. Well, I hope you guys have a great day and I will see you next time!
Posted by Ruhtra No comments: